Home/Blog/Altitude Sickness in the Himalayas

Altitude Sickness in the Himalayas 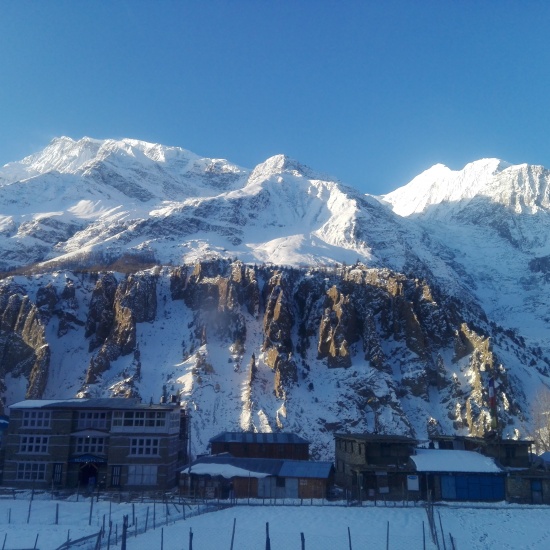 Cause of High Altitude Sickness

High Altitude Sickness left untreated can advance to high altitude cerebral edema (HACE) or High Altitude Pulmonary Edema (HAPE). The symptoms of HACE are unmistakable as the individual will have a drunken like walk. The symptoms of HAPE are completely different and are as follows; coughing pink or frothy sputum, tightness of the chest, shortness of breath at rest, a gurgling breath as if the lung is congested, a bluish discoloration of the skin (Cyanosis) and/or an abnormally fast resting heart rate of over 100 HBM. Once HACE or HAPE develops death is possible within hours unless the trekker is immediately evacuated to a lower elevation. If someone has signs of HACE or HAPE its key that a responsible member(s) of the trekking party accompany this person to a lower elevation immediately no matter the time of day or the weather conditions.

Hand-held pulse oximeters are now commonly used in the diagnosis of High Elevation Sickness as well as HACE or HAPE. Oxygen saturation readings below 75% may be useful in the diagnosis of HAPE. A limiting factor in the use of the devices is that Oxygen saturation may remain normal as individuals tend to breathe faster at higher elevations and thus have normal readings. The common consensus is that their best use may be as a confirmation tool for someone who already has definitive symptoms of elevation sickness.

The most common medication used to prevent High Elevation Sickness is Diamox (Acetazolamide). This can be easily purchased on arrival in Kathmandu and a dose of 125mg twice daily starting 1 day before ascent has been suggested by the Everest Base Camp Medical Centre. If you already have High Elevation Sickness the dose can be increased to 250mg twice daily. It’s a common myth that this drug only masks the symptoms of High Elevation Sickness but it actually works to speed the natural acclimatization process by acidifying the blood and thereby stimulating the depth and frequency of your breathing.

The Facts about Proper Acclimatization

The best rate of acclimatization is to gain no more than 300m (1000 feet) per a day. If you increase this rate you will be much more susceptible to Elevation Sickness. This should be considered based on where you sleep at night and not how high or low you trek during day. In fact trekking higher during the day and then returning to a lower elevation to sleep can speed the rate at which you acclimatize but its not an excuse to break the basic rule.

Alcohol is a member of the benzodiazepine family and as such can suppress breathing which results in lower blood oxygen levels so should be avoided as a general rule. Coffee has no impact on acclimatization and if you typically drink several cups a day keep at it. If you are a regular coffee drinker be aware that stopping abruptly could cause a severe headache that might be confused with a high altitude headache.

Several studies have suggested that individuals trekking in organized groups may be more susceptible to high elevation sickness. The postulated reasons are that individuals are impacted by group psychology and don’t want to cause difficulties for the group as a whole. It’s important to keep this in mind as an individual and maintain a level of self awareness. It’s better to rest a day and get proper acclimatization then deny symptoms which may result latter in an evacuation.